Who do I vote for? 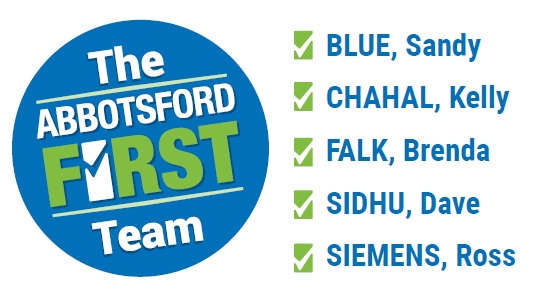 Note: there's no maximum number of councillors you need to vote for (e.g. you can vote for only the AbbotsfordFIRST candidates).

How can I get a ride to the polls?

or email us at [email protected]

Abbotsford residents who are:

Scroll below for information regarding Non-Resident Property Electors.

I'm going to be out of town on Election Day. What are my options?

Two Advance Voting opportunities will be available for your convenience, on October 10 and 13, 2018. Both Advance Voting opportunities take place from 8:00 a.m. - 8:00 p.m. at Exhibition Park (Ag-Rec Building Main Floor), 32470 Haida Drive, Abbotsford. Ensure you bring your Voter Notification Card if you have one, and at least two pieces of acceptable identification when you go to vote. Please note the City of Abbotsford does not provide for Mail Ballot Voting.

What types of identification must be produced in order to vote?

In all cases, voters must produce at least two (2) documents that provide evidence of identity and place of residence, at least one (1) of which must contain your signature. The classes of documents that may be accepted as evidence for the purposes of Section 57 or 57.1 of the Local Government Act are:

What do I do if I have recently changed my name?

Pending the required two pieces of acceptable identification being provided, you may change your name in the system when you go to vote. If you are recently married, it is recommended you bring a copy of your marriage certificate with you when you go to vote.

What if I did not receive a Voter Notification Card? (ie. recently turned 18, missing card, etc.)

If you have not received a Voter Notification Card in the mail, please us the "Find Your Voting Place" tool at abbotsford.ca/election to locate your Voting Place.  You may register to vote at the Advance Voting Opportunities (October 10 or 13), or on General Voting Day (October 20).